Can a five-minute video about a fictional child of divorce have a significant future impact on the lives of separated or divorced parents, as well as family court attorneys and law students? One recently retired family court judge believes so. Former New Jersey Superior Court Judge Lawrence R. Jones is releasing his fictional work, "Point C", to law schools, state bar associations, and other judicial, legal, and child advocacy organizations throughout the United States and the United Kingdom.

"Point C" is a five-minute video fable authored by Jones, complete with original music and lyrics. The story focuses on a child growing up in the midst of a hostile battle between divorcing parents. The work is also featured in a newly launched public service website created by Jones for both parents and professionals regarding children of divorce, located at www.pointcvideo.com.

Both the "Point C" video and website will be formally dedicated on July 22, 2018, which is National Parents Day in the United States.

In discussing the social goal of "Point C", Jones emphasized the need to inject logic and common sense in dealing with high conflict separation and divorce involving children.

"Pursuant to applicable canons and principles, judges, lawyers and other professionals who participate in the law are encouraged to engage in activities to actually improve the law and the legal system, including speaking, writing, lecturing, teaching, and participating in other activities concerning the administration of justice," said Jones. "This is particularly critical with respect to family court battles and child-related disputes. I wrote 'Point C' and then established the website as a method of helping both parties and professionals focus on the reality that extended litigation may itself be contrary to a child's best interests in the long run."

Jones further identified why he utilized the non-traditional vehicle of a short musical fable to underscore a legal message to both parents and professionals. "I am very aware that people sometimes have short attention spans before their eyes start glazing over," he explained. "For this reason, sometimes a five-minute fable can be as educationally relevant and impactful as a stack of textbooks or a three-hour lecture."

Several well-known figures in the music industry have voiced highly positive support for Jones' work and the underlying social message of "Point C".

Mike Appel, former manager of Bruce Springsteen and co-producer of the landmark album, "Born to Run", stated that "Point C" is "a great tool to bring attention to the trauma that children must endure when their parents are going through a tumultuous, knock-down drag-out divorce ... Children are the collateral damage of almost all divorces making 'Point C' such an indispensable piece of healing." The work can be "a blessing and provide lasting value to both parents but a windfall to the child caught in the middle of something he or she did not have a hand in starting."

"A picture's worth a thousand words," added Appel, and "'Point C' has the lyrics and music to prove it."

Marty Dodson, multi-hit songwriter whose credits include works recorded by multiple artists including Carrie Underwood ("Songs Like This"), Blake Shelton ("Doing it to Country Songs"), Rascal Flatts, ("While You Loved Me"), Kenny Chesney ("Everybody Wants to Go to Heaven"), and Billy Carrington ("Must Be Doin' Something Right") also commended the work. Said Dodson, "'Point C' hit me in the heart with its message of putting the children first in a divorce. It also points out the very real possibility that one or both parents could lose their child in the end if they don't continually monitor their well-being and consider their feelings as a divorce evolves into a new normal. The new normal for the child may be far more difficult than it is for the parents."

Dodson, who is also the co-founder of the country songwriting organization "Songtown", added that "'Point C' can serve as a powerful reminder to divorcing parents to keep their children's best interest at the forefront at all times. In a non-threatening way, 'Point C' delivers a poignant message."

Paul Green, founder of the School of Rock and former music coordinator for the Woodstock film festival, said that "'Point C' is a well-made and important piece of music and social commentary that could very well serve some real value to the legal community."

"'Point C' conveys an important message that needs to be heard," stated Green.  "Divorce law, when it involves children, is much more than a battle over assets. Lives are affected and perhaps to greater degrees than we recognize, and some sort of tool is required to remind legal professionals of this fact. The 'Point C' video seems to be a perfectly adapted tool for this job."

Originally founded by Green, The School of Rock now serves more than 17,000 students via 140 locations in eight countries and is the largest after-school music program in the United States. In discussing the message of "Point C", Green reflected upon his own experiences in teaching music to children of divorce.

"In my position working with kids, I have also had a front-row seat from which to watch the effects of divorce on young people's lives. As powerful of a positive influence learning to play an instrument can be as in a young person's life, the consequences of a divorce can be just as destructive. I have seen far too many of my students struggle with the fallout from a divorce on top of everything else a young person has to deal with just to get by in this world. Whether it is only being able to take lessons or rehearse on certain days because of a custody arrangement or setting up performances so that mom can come Friday, and dad can come Saturday, it is all too much to ask of a young person who just wants to get on stage and express themselves," said Green.

"The very act of listening to music can quell fears and inspire hope in young people, and a lyric can put into words what is in our heart, but we have been unable to express. Young people come to music and soon find a genre that speaks to them. Through that genre they often find a scene and, in that scene, find a community and friendships that last a lifetime," added Green.

Before retiring from the Judiciary in 2017 and releasing "Point C", Judge Jones authored over 60 opinions on novel issues of family law and was one of the top-rated trial judges in New Jersey. In 2012, the New Jersey Law Journal triennial survey of attorneys ranked Judge Jones tied for first place as the highest rated trial judge in the state. In the following triennial survey of 2015, Jones again finished with the top judicial rating in his county. In 2014-15, Jones served as the President of the New Jersey Council of Juvenile and Family Court Judges.

Jones has also served as a member of the transition team of two New Jersey Governors, including current Governor Phil Murphy, who in 2017 appointed Jones to his transitional committee on issues of law and justice. In 2017, Jones was named by the New Jersey Law Journal as a Distinguished Leader of the New Jersey Bar.

In addition to the video, the "Point C" website also contains two open letters authored by Jones. The first letter is addressed to separating and divorcing parents, and the second letter is addressed to judges, state bar association presidents, and law school deans throughout the United States and United Kingdom regarding the teaching of family law and the meaning of a child's "best interests." The "Point C" website also contains a list of suggested ways that parents can help their child during separation or divorce.

On July 22, 2018, "Point C" is scheduled to further expand onto multiple social media sites. July 22, 2018 is recognized as National Parent's Day this year in the United States. In 1994, President Bill Clinton signed into law 36 U.S.C 135, a Congressional Resolution formally establishing National Parents' Day in the United States, and officially declaring that "all private citizens, organizations, and Federal, State, and local governmental and legislative entities are encouraged to recognize Parents' Day through proclamations, activities, and educational efforts in furtherance of recognizing, uplifting, and supporting the role of parents in bringing up their children."

Said Jones, "Consistent with the spirit of National Parent's Day is the reality that as parents we are all also human beings. Nobody is perfect. We all make mistakes and are prone to errors in behavior and judgment, particularly during times of emotional stress such as separation or divorce. When parents decide to have a more positive and civil relationship with each other, instead of a perpetually contentious and litigious one, the child may greatly benefit. Hopefully, some separated or divorced parents will consider celebrating National Parents' Day by resolving to try a fresh parental approach toward helping their child."

In addressing his long-term vision for "Point C", Jones set forth his hope that his work helps both parents and professionals alike.

"The goal is that our leaders in the field of legal education, including law school deans, national and state Bar Association officials, and members of the Judiciary will ultimately share 'Point C' with their constituents and professional peers, and perhaps elect to incorporate the story as a relevant supplement to some of the more traditional methods of education in the field of family law. Hopefully, the lawyers, judges, mental health professionals and others who typically meet contentious separated or divorced parents may consider sharing the message of 'Point C' with such individuals, thereby potentially helping parents and children at the same time."

Jones emphasized that many states have mandatory parental education classes which parents who file for separation or divorce must attend. "Some states and counties may find that different tools like 'Point C' may be very helpful additions to their parent education programs, as food for thought for separated or divorced parents trapped in a never-ending cycle of legal and emotional warfare," he added.

"In the study of law, 'Point C' represents a very non-traditional way of presenting a legal point," concluded Jones. "Nonetheless, every now and then you just have to go outside the box to drive home an important message. In this respect, my hope is that 'Point C' can help make a relevant and positive social difference for the public good." 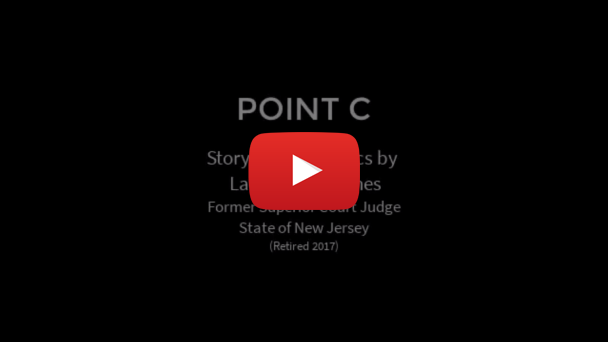